InnoVolga, time to take stock of the ecological citizen project

InnoVolga, time to take stock of the ecological citizen project

The beginning of 2021 marks the end of the InnoVolga – Vié ka fè nèf project, which animated the heart of Volga Plage for almost 2 years.

Under the watchful eye of industrial engineer Aldric Julienne, the town’s citizen collective organised several workshops on plastics and aluminium. The aim: to understand these particular materials and the possibilities of recycling at the local level. InnoVolga has found its source in the “Precious Plastic” website, a project launched by Dave Hakkens, which proposes to take action around individual waste.

During the workshops (which can be found on the association’s Youtube channel: https://www.youtube.com/channel/UCWFL1CKVm_VhZmcZ37f68Yw), various recycling machines were presented and even manufactured; this is the case of the furnace, for example, which can be used to transform cans into domino games. For Aldric Julienne, plastic recycling is a real field of experimentation, and putting it into practice at an individual level is a window on the future. 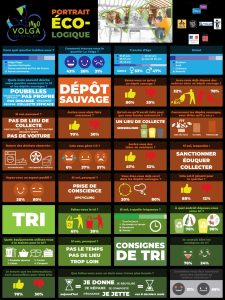 There are many issues surrounding local recycling: tending towards self-management of waste at the level of a citizen community is part of a desire to build new, more sustainable economic and ecological models. D’Antilles et d’Ailleurs joins forces and encourages each project that, like InnoVolga – Vié ka fè nèf, uses citizen participation (here notably led by Juliette Lambert) and collective intelligence to build a society that is more respectful of the environment.

During the project, a questionnaire was devised to find out more about sorting habits; after collecting more than a hundred of them, a cartography was made to visually summarise all the data. It is interesting to note, for example, that 61% of those questioned said that they sort waste (only half of them daily) but that, on the other hand, nearly 80% have already disposed of waste in a dump. All other information is available by clicking on the visual!

Previous Story
Report from Martinique 1st on the seine line in Go Responsible
Next Story
Feedback: Go-Responsible, or how to (re)invent tourism in 2020